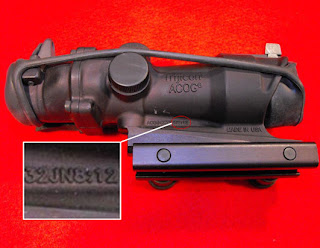 Coded references to New Testament Bible passages about Jesus Christ are inscribed on high-powered rifle sights provided to the U.S. military by a Michigan company, an ABC News investigation has found.
More PhotosThe sights are used by U.S. troops in Iraq and Afghanistan and in the training of Iraqi and Afghan soldiers. The maker of the sights, Trijicon, has a $660 million multi-year contract to provide up to 800,000 sights to the Marine Corps, and additional contracts to provide sights to the U.S. Army. 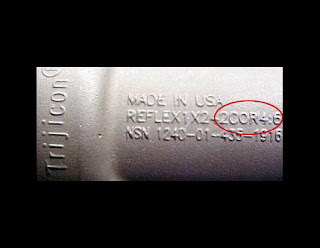 U.S. military rules specifically prohibit the proselytizing of any religion in Iraq or Afghanistan and were drawn up in order to prevent criticism that the U.S. was embarked on a religious "Crusade" in its war against al Qaeda and Iraqi insurgents.
Posted by titto at 10:51 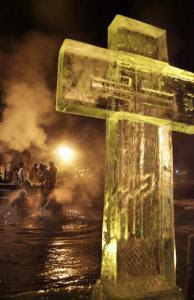 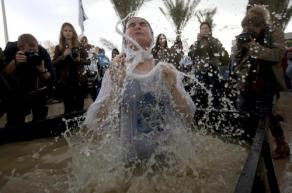 MOSCOW, Jan 19 - Scantily clad Orthodox Christians braved freezing temperatures throughout Russia on Tuesday to immerse themselves in ice holes in rivers and lakes to celebrate the Epiphany religious holiday.
To Orthodox believers, water blessed by a priest on Epiphany has miraculous powers, a belief harking back to Christ's baptism in the River Jordan. Jumping into the water is optional, but is a popular ritual among the faithful.
Water blessed on Epiphany "never goes stale, sick people who touch it are healed, devils are driven out and people are given strength," Patriarch Kirill, head of the Russian Orthodox Church, said Monday during a trip to Kazakhstan.
Around 30,000 people immersed themselves in ice holes in Moscow overnight, the RIA-Novosti state news agency reported, citing city police.
The emergency situations ministry said it had posted over 200 lifeguards at lakes and rivers around the Russian capital to help prevent tragedies.
Just after midnight on Tuesday morning, worshippers gathered at a golf club outside Moscow, braving temperatures of minus 25 Celsius (minus 13 Fahrenheit) to leap into an ice hole, an AFP journalist witnessed.
Around 200 people followed a priest in a candle-lit procession to a nearby river, their breath throwing up clouds of steam. They then stripped to swimming trunks or wore long white shirts to complete the ritual bathing.
The well-off worshippers had paid 3,500 rubles (119 dollars) for a holiday package that included felt boots and a shirt to wear during immersion, as well as a performance by a Cossack choir and a buffet afterwards.
Six percent of Russians were planning to jump into ice holes for Epiphany, according to a poll published Monday by the Levada Centre, the country's most respected polling firm.
A more cautious 48 percent planned to visit a church to collect water blessed by a priest, the poll said.
The holiday is a favourite with politicians, who reinforce their reputation as devout Russian Orthodox believers by jumping into the ice in previously announced photo opportunities.
Posted by titto at 10:44

President Obama on Sunday recalled the work of slain civil rights leader Martin Luther King Jr. as he urged those packing a Baptist church to take heart in hard times and celebrate progress, however small.
On the eve of the federal holiday marking King's birth, the first black president said he learned -- as did the civil rights leader -- to rely on his faith even as he felt the "sting of criticism" during his first year as president.
Mr. Obama pointed specifically to his attempts to move the country out of the deepest economic downturn since the Great Depression while pressing for an overhaul of the health care system.
Speaking at the Vermont Avenue Baptist Church, founded in 1866 by former slaves, Mr. Obama called King and those who fought with him for civil rights the "Moses generation." He exhorted parishioners -- those he termed the "Joshua generation" -- to "get back to basics" as Americans faced the challenges of a "new age."
The president was headed to Boston in support of the Senate candidacy of state Attorney General Martha Coakley, who is in a tight race for the seat of the late Sen. Edward M. Kennedy. Her defeat would upend the Democrat's 60-vote majority in the Senate, making it impossible to overcome a filibuster that could kill hard-fought health care legislation.
In his remarks at the Washington church, Mr. Obama reflected on the difficulties he has faced in pushing key elements of his legislative agenda through Congress and the periodic distractions that have arisen from remarks about his race.
Referring to the "post-racial" and "post-partisan" shift in the country that many observers predicted would flow from his inauguration a year ago, he said, "That didn't work out so well."
Mr. Obama was accompanied to the church by first lady Michelle Obama and their daughters, Sasha and Malia.
King himself spoke in 1956 at Vermont Avenue Baptist Church, located just over a mile north of the White House.
Then a 27-year-old preacher who was emerging as a prominent voice in the civil rights movement, King visited Washington shortly after the U.S. Supreme Court sided with a ruling that led to the end of racial segregation aboard city buses in Montgomery, Ala. King was one of the leaders of a bus boycott that lasted more than a year.
Monday is the first King holiday since Mr. Obama became president.
Posted by titto at 10:38 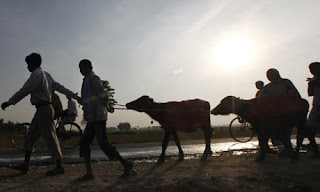 The world's biggest animal sacrifice began in Nepal today with the killing of the first of more than 250,000 animals as part of a Hindu festival in the village of Bariyapur, near the border with India.
The event, which happens every five years, began with the decapitation of thousands of buffalo, killed in honour of Gadhimai, a Hindu goddess of power.
With up to a million worshippers on the roads near the festival grounds, this year's fair seems more popular than ever, despite vocal protests from animals rights groups who have called for it to be banned. "It is the traditional way, " explained 45-year old Manoj Shah, a Nepali driver who has been attending the event since he was six, "If we want anything, and we come here with an offering to the goddess, within five years all our dreams will be fulfilled." .
Crowds thronged the roads and camped out in the open, wrapped in blankets against the cool mist. The festivities included a ferris wheel, fortune-telling robots and stalls broadcasting music and offering tea and sugary snacks.
As dawn broke, the fair officially opened with the sacrifice of two rats, two pigeons, a pig, a lamb and a rooster in the main temple, to cheers of "Long live Gadhimai" from spectators pushing against each other for a better view.
In the main event, 250 appointed residents with traditional kukri knives began their task of decapitating more than 10,000 buffalo in a dusty enclosure guarded by high walls and armed police.
Frightened calves galloped around in vain as the men, wearing red bandanas and armbands, pursued them and chopped off their heads. Banned from entering the animal pen, hundreds of visitors scrambled up the three-metre walls to catch a glimpse of the carnage.
The dead beasts will be sold to companies who will profit from the sale of the meat, bones and hide. Organisers will funnel the proceeds into development of the area, including the temple upkeep.
On the eve of the event, protesters made a final plea to organisers by cracking open coconuts in a nearby temple as a symbolic sacrifice. "It is cruel and inhumane. We've always been a superstitious country, but I don't think sacrifice has to be part of the Hindu religion," said the protest organiser, Pramada Shah.
The campaign has the support of the French actor Brigitte Bardot, who has petitioned the Nepalese prime minister, Madhav Kumar Nepal, about the issue. But the government, which donated £36,500 to the event, has shown no sign of discontinuing the centuries-old tradition. An attempt by the previous government to cut the budget for animal sacrifice provoked street protests.
Chandan Dev Chaudhary, a Hindu priest, said he was pleased with the festival's high turnout and insisted tradition had to be kept. "The goddess needs blood," he said. "Then that person can make his wishes come true."
Posted by titto at 00:06 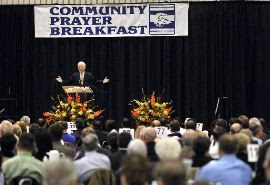 A murmur of praying voices filled the Amarillo Civic Center at daylight Tuesday. Among them, one could hear the names "David Logan, Gary Hinders," and, more generally, "our judges," "the policemen" and "all the teachers at Amarillo High."
A few people clasped hands as they prayed. Others lifted their hands toward heaven.
Logan and Hinders are Canyon city commissioners, two of the many people listed on the prayer guide distributed at the Community Prayer Breakfast on Tuesday.
About 1,300 people gathered at the civic center and asked God to bless and guide them, as did other local, state and federal leaders.
The prayer breakfast, in its 20th year, combines youth, music, sounds of patriotism and an inspirational speaker. Patrick Morley, author of "Man in the Mirror," a look at time, temperament, finances and relationships from a masculine perspective, spoke of emptiness after a life of financial success.
"I realized I wasn't looking for God. He was looking for me," he said.
Morley outlined spiritual struggles facing most people, including the desire to live worldly lives while trying to nurture a spiritual life.
"God loves you, and he wants you to repent," he said.
Roland Shorter Jr., a prayer breakfast guest, studied "Man in the Mirror" at church.
As men's ministry leader at Amarillo Bible Fellowship, he came looking for ideas to help the dozen men involved with the ministry become better Christians.
And he found an idea.
"It's repenting. We've got to repent of the world," Shorter said.
Lucy Karr has been on the prayer breakfast committee for 15 years. Its value as an event is in its emphasis on God and his love, and in the prayer for healing of the land, she said.
"It's the most rewarding thing I've ever done. ... I think it's a little taste of heaven," Karr said.
Posted by titto at 00:00

JUST HAVE A LOOK

Support CHRISTIAN ALERT every time you shop at amazon.com! Click through to amazon from anywhere on our site, and your purchase contributes to our mission at no extra cost to you.

Promote Your Page Too